I loved being in Japan for New Year’s (‘shogatsu’). On NYE this year I found myself in Yokohama, counting down to midnight in a language other than my own for the first time in my life. It was a special experience, and although my brain was struggled with the fact that I was counting down to what was 3pm in the UK – it was fun to think that my 2017 was going to have an extra 9 hours on everyone else’s.

New Year’s in Japan has a few things in it that UK New Year’s does not. For starters, you are made very aware of which year it is in the Chinese calendar. This year being the year of the rooster. 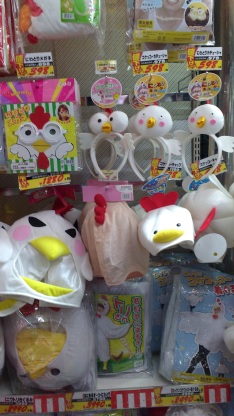 Aside from this, there are some really lovely New Year’s traditions in Japan, that it was absolutely wonderful to be able to share in, and I thought that by writing about some of them, you could have a share in them too!

This is a traditional Japanese decoration placed in pairs in front of homes (and shops) to welcome ancestral spirits,’kami‘, of the harvest. They are placed outside sometime after Christmas until January 7th, and are considered to be temporary housing for the ‘kami‘.

Every kadomatsu item has a spiritual meaning: the bamboo is a symbol of strength and prosperity and the pine symbolizes long life. The 3 bamboo pieces represent heaven (the tallest one), humanity (the medium one) and the earth. 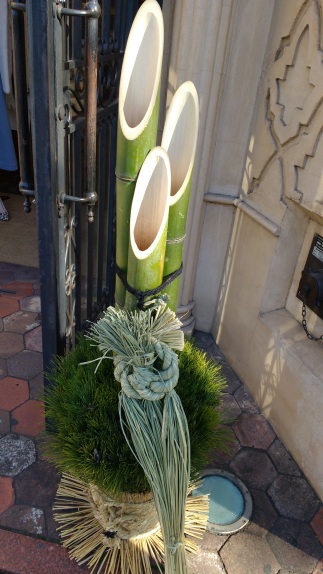 Tied to the ‘kadomatsu’, and on porches, are ‘shimekazari’ – small ropes made from rice straws, with carefully crafted zigzag-shaped paper strips called ‘shide’. These type of decorations are also pictured in the header photos of this post, a photo took of them at a shrine in Kamakura. All ‘shide‘ have the same role of keeping bad spirits away.

‘Shimekazari’ is also decorated with auspicious items: the daidai, a Japanese bitter orange is considered a good omen because if ‘daidai’ (橙) is written with a different kanji (代々) can be translated as ‘from generation to generation’. Pine twigs are symbols of power and longevity, because they are always green. The fern leaves are symbols of hope and desire to have a happy family that grows with the generations. This is the one that was on Yukina’s door: 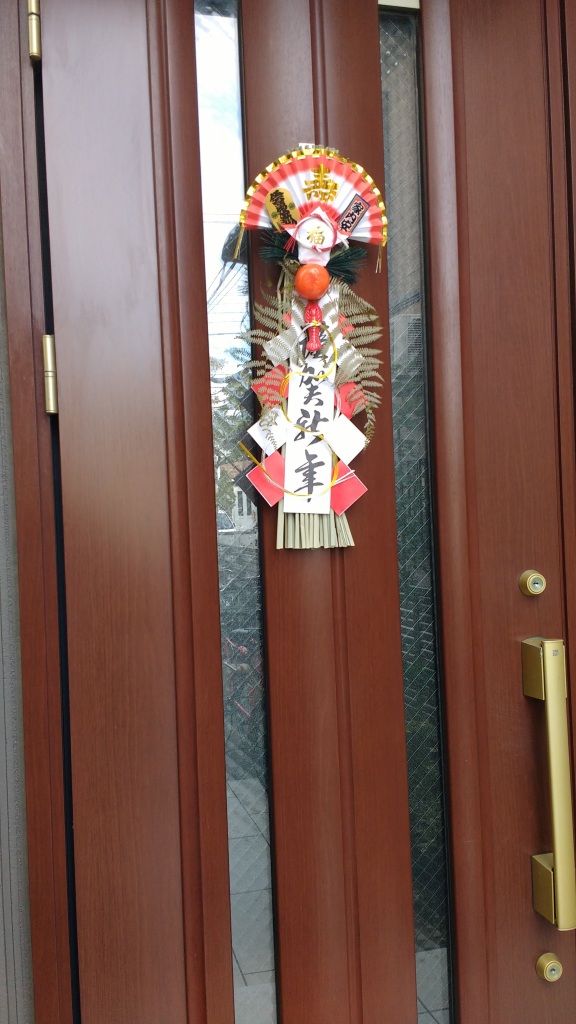 This is a Japanese monetary gift given at New Year’s. I was fortunate enough to receive such a gift from the people at the church I attended on New Year’s day (though it’s usually only given from adults to the children in their own families – and even if being in Christ’s family counted, they still gave me far too much money for what would be reasonable!)

The envelope it was presented to me in now sits on my bedside table. It’s a reminder to me of the love and grace shown to me, even by those who owed me nothing – that I might show the same love and grace to others.

This is the first visit to a shrine in a year, with most people thinking that it should take place during the matsunouchi period of January 1st to 7th. A lot of people do this on NYE itself, to hear the temple’s bell being run at midnight. (Another note on NYE, a lot of people watch a very popular music TV show called ‘Kohaku Uta Gassen‘ on which Piko Taro, the ‘pineapple man’ I mentioned on my previous post, made an appearance this year). Around this time, all temples and shrines are extremely busy with the most popular playing host to over a million people each in just the first few days of the year! 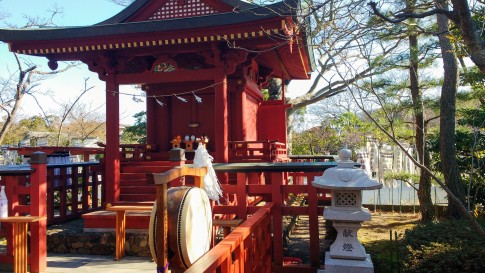 Can you see the ‘shide’?

The standard procedure for offering your prayers when you are at the altar part of the shrine itself is ‘two bows, two claps, one bow.’ You ring the bell and throw in your offering money, then bow twice towards the altar, before clapping your hands twice and putting your hands together and pray. At the end, there is then a final bow. 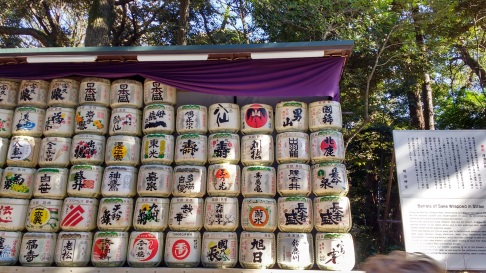 I didn’t join in with this myself, but got to witness my friends as they offered their prayers (you can see Seiya doing so above).

Also at shrines and temples are ‘omikuji‘ fortune slips. You shake a box with ‘mikuji’ sticks in it, until one of them comes out a very small hole in the corner of the box. The stick that comes out has a number on it, based on which you are given a slip with your fortune for the year. If you get a bad fortune, there are places to tie your fortune slip to negate the fortune (or get rid of it, I’m not sure!). My friend Ai got a particularly good fortune on her first visit to a shrine this year, and so she placed her omikuji slip in her purse! I felt like the level of importance ascribed to this fortune pretty much matched how good the fortune turned out to be… 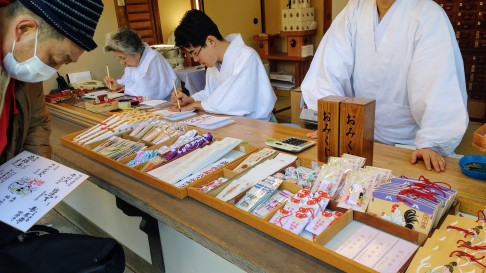 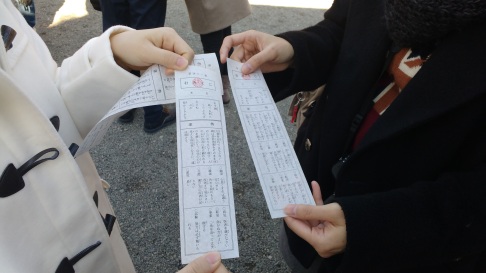 Getting rid of bad fortunes!

Traditionally done on January 2nd (the same day as the Emperor of Japan makes his New Year’s appearance in the Imperial Palace Gardens – see this post). People write words or a short piece of Japanese or Chinese poetry (such as haiku or tanka)  but mostly just a kanji character that has a positive meaning or says something of their wishes for the year.

I only experienced this by chance. We were in the shopping centre by the Tokyo SkyTree when I spotted lots of people writing calligraphy, and I asked my friends whether we could join in. Luckily because of cancellations they had space for us all, so I got a taster!  Mine says ‘shiawase‘ (happy), because it’s the only kanji character I know (and I still had to copy Yukina), Ryota’s says ‘ai‘ (love) and I can’t quite remember what Yoshino’s or Kenjo’s says… 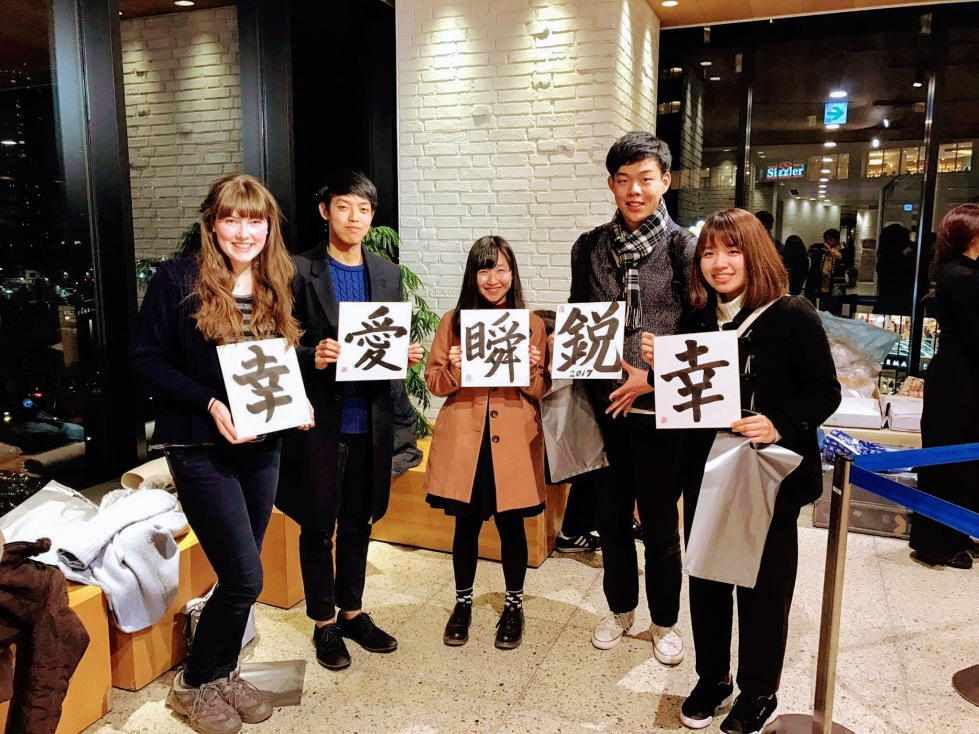 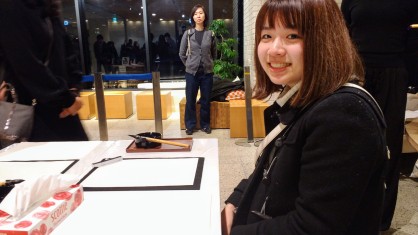 As well as being able to keep the calligraphy I had made, I was given a booklet telling me about the work of Mohri Suzuki, a famous, award-winning calligrapher. The photo below is of a page from inside of the booklet. On the left is ‘miyabi‘, and on the right is ‘yuu‘.

‘Miyabi‘ (elegance). Time flows continuously, slowly, and with simple purpose, and we move with it, changing endlessly without pause.

‘Yuu‘ (kindness). Given freely without guile, it is naturally received when least expected.

My favourite however, is, I think, ‘shikarubeku‘ – if something is meant to be, it will happen. At the right time, with the right person, for the best reason. This reminds me of something written in Corrie Ten Boom’s memoir, ‘there are no ‘ifs’ in God’s kingdom‘.

The New Year Ekiden is an annual men’s ekiden (road running relay) over 100 kms. It takes place in Japan’s Gunma Prefecture on January 1st. It’s a national championship between Japan’s corporate (business) running teams. The relay is divided into seven legs of varying lengths, which alternate depending on the year.

I had no idea about this before I went, but found out about it since it was followed very avidly by Yukina’s family, and I was staying with them at the time. The competition is broadcast on Tokyo Broadcasting System Television every single year, and there is also coverage on the radio. It’s basically like a marathon relay race!

‘Soba‘ (noodles) is the way to go on NYE, because of the ‘long noodle long life’ thing they’ve got going on. The first time I ate noodles in Japan I had to try quite hard not to wince at all of the slurping sounds going on around me. Try to mentally prepare yourself for this so that you don’t have to be like me! 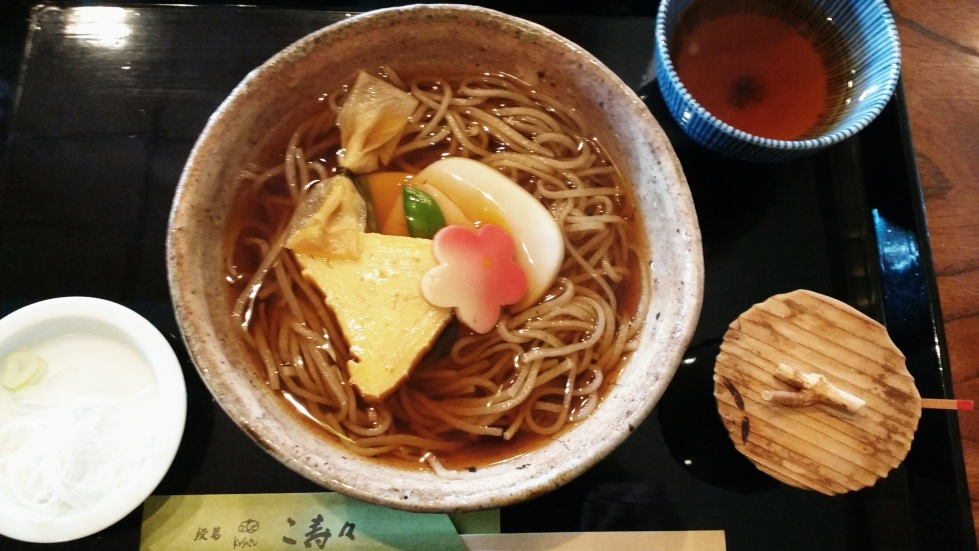 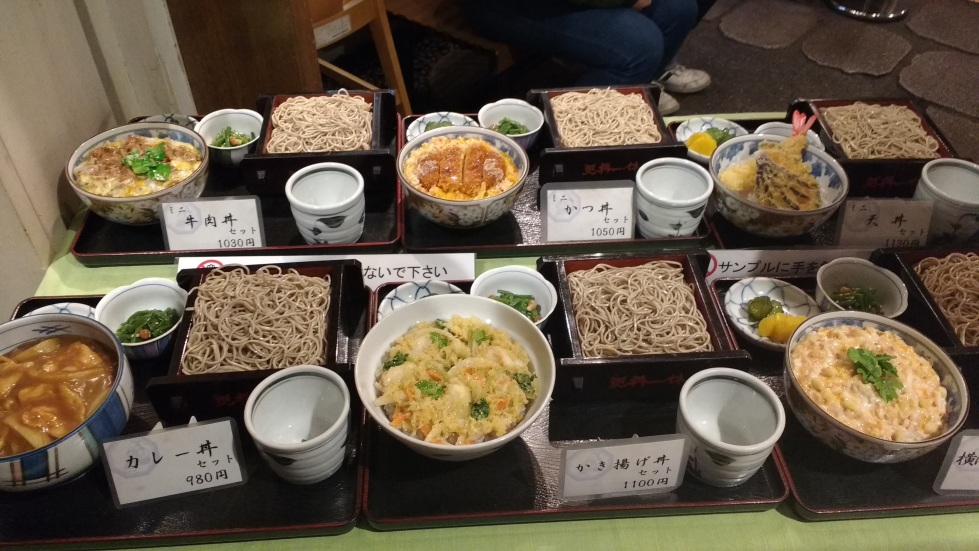 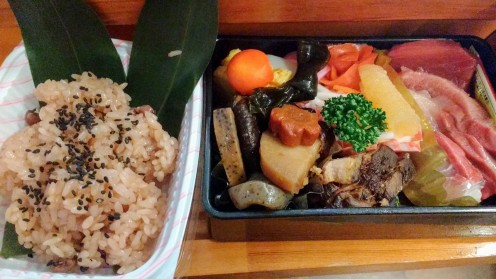 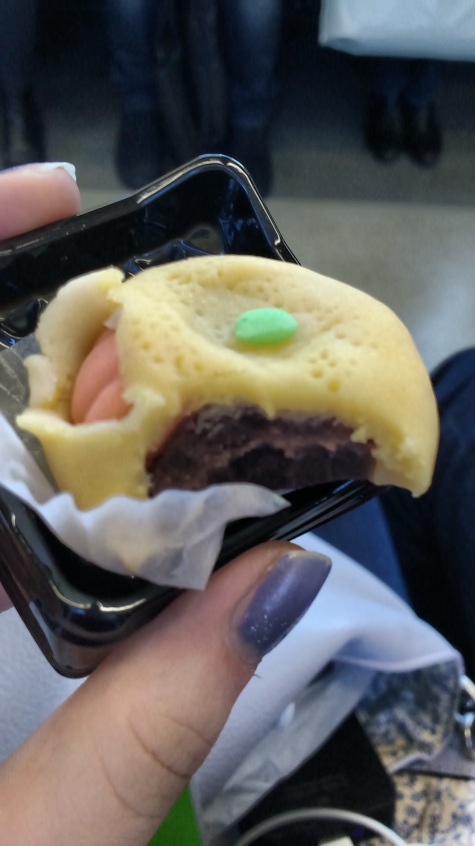 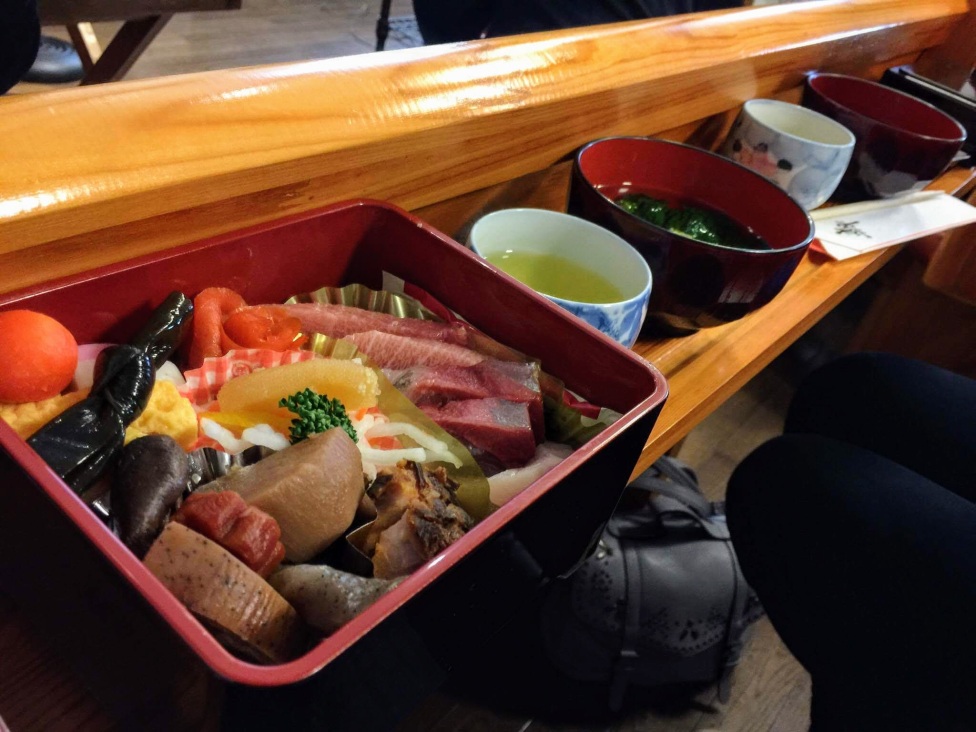 You’ll also see ‘kagami mochi‘, Japanese rice cake, displayed throughout the New Year’s holiday in people’s homes, before it is eaten on January 11th. It’s made from two rice cakes (‘mochi’) of different sizes, the smaller placed over the larger one, and a ‘daidai‘, the Japanese type of bitter orange mentioned previously, placed on top. The rice cakes are meant to look like the copper round mirrors used in the Muromachi period (‘kagami‘).

On the 11th a Shinto ritual named ‘Kagami Biraki’ (the opening of the mirror) takes place. The kagami mochi is broken, with the hand or with a hammer, into edible-size pieces and it is cooked. (A knife is never used, because it would mean cutting the family ties!)

The following image isn’t mine, but it is in the creative commons, so all is ok! (Note the ‘shide‘ mentioned earlier)

New Year’s is a very big deal in Japan! It’s also a lot of fun, and if you do get the opportunity to visit, the beginning of the year would be a good time to go (even though everyone will say ‘ah, but you won’t get to see the sakura‘ – the cherry blossoms).  You can always go more than once…

If you do go, the best tip I can give you is still to go and find Minamimachida Church on New Year’s day as I did. There you will meet with the most wonderful people and encounter the purest  form of ‘omotenashi‘ (Japanese hospitality)!

I was also able to find one of the hymns sung that day, by searching the lyrics from the English order of service I was given. This YouTube version below is obviously kinda different, what with it not being sung in Japanese and all, but it is wholly able to take me straight back to New Year’s Day, 2017.

Witnessing a small part of God’s faithfulness and grace will always be the very best way to welcome in another year!