Many of you may have read the posts I wrote before and after Trump got elected (What if the world should end?, Time to Weep).

I thought I’d share a little of where recent events have taken me subsequently. Specifically, about how the Executive Order issued last week took me to London.

The Executive Order on Visas and Refugees

What this order sets out (full text here):

Why this is frightening:

Exactly a week before this order was passed, millions marched in the streets standing for freedom and democracy. It is horrifying that such an order could be enacted only seven days later, and painful that it could be enacted on Holocaust Remembrance Day. Too many Jews were turned away as refugees at the US border in 1939, only to later be slaughtered in extermination camps (see this twitter account). Perhaps the parallels do not seem so clear to you – but I see a focus on nationalism, a disdain for human rights, disrespect for intellectuals (e.g. denial of climate change), the identification of enemies/scapegoats, an obsession with national security, and a preoccupation with controlling the mass media. My concern is not premature.

I do not want the death toll of Trump’s administration to start mounting as I stand silently on and watch.

Hesitancy to act, the call to ‘give things a chance’ or to ‘wait and see’, is to put trust in the wisdom and leadership of a human leader. But that is not a trust I am willing to have blindly, especially not when I am all too familiar with the evil of my own heart. The goodness of those in power is not to be taken as a given; only on the goodness of God can we depend. And that often means not standing with the powerful, but instead with the powerless.

As a follower of Jesus, I want always to choose the route of compassion and not that of complicity. To be active in trying to give a voice to the voiceless.

27 Religion that God our Father accepts as pure and faultless is this: to look after orphans and widows in their distress and to keep oneself from being polluted by the world.

The first part of this verse is a reflection of the fact that loving people is our greatest command. A religion that reaches out to those who are outcast is what we are called to. A religion that welcomes the stranger, that feeds and clothes the poor, that chooses grace and mercy over fear and judgement. A religion that is active, a religion that therefore is, sometimes necessarily, political.

The second part of this verse is a reminder to stay alert to the evil we will see, and do see, on this Earth. A reminder not to be swept along in it, but to always walk in truth, walk with boldness, walk with conviction. A reminder of a responsibility to keep being light in dark places.

This week, this verse meant being horrified by the complicity of my government in the injustice of the executive order. Horrified that our PM could say only that, “The United States is responsible for United States policy on refugees” (BBC), that Downing St could issue a statement saying that, “America is a huge important ally. We have to think long term.” (BBC). Horrified of the sort that is enough to get on a train to London.

Did you know? My Saviour Himself was a refugee.

And so on Monday night, when I went with Lucy to Downing St to protest, I thought of Jesus. My Saviour whose blood was shed for those resident in the White House and 10 Downing Street and for those with no residence whatsoever.

Lucy and I prayed together in the middle of the crowds. Prayed for justice. Prayed for peace. Prayed for courage. Prayed for hope. And we will keep on praying, keep on in pursuing justice, for we believe that justice is restoration. 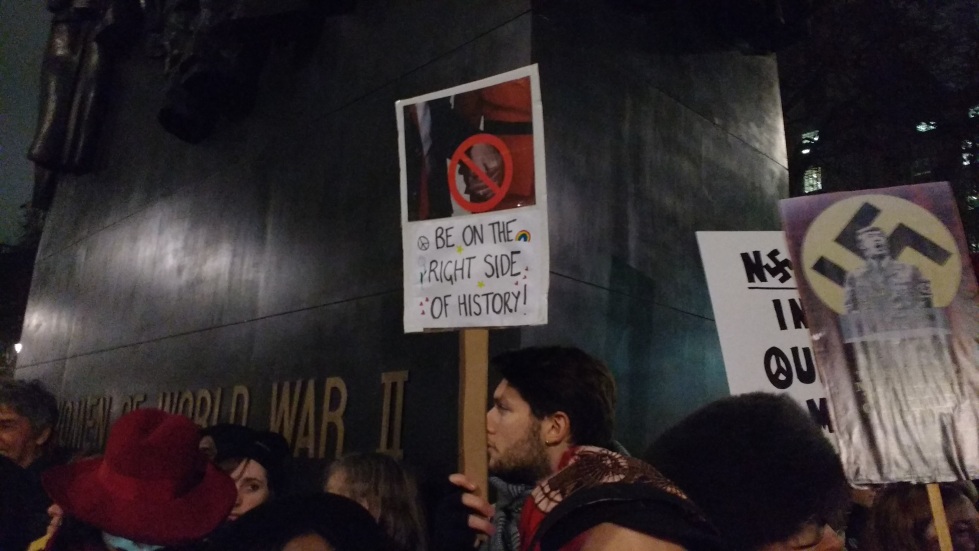 Lucy and I will be back again, for whilst it may have just been announced that the executive order has come to a halt (BBC), all is not yet over. There will be many other things to come. Already, there are moves to restrict the reproductive rights of women (re-instating a ban on international abortion counselling), reduce the healthcare provisions of the Affordable Care Act, and undo much of the work to combat climate change (signing executive orders to build two pipelines across America, stating intent to undo the climate action plan, and to stop funding UN climate change work).

“In this world you will have trouble. But take heart! I have overcome the world.” 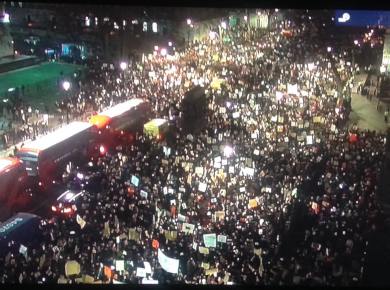