What are these? Where do they come from? Why are they everyyyywhere? They look weird and fake but they’re also strangely enchanting? (update: I’ve found out that they are flowering kale!) 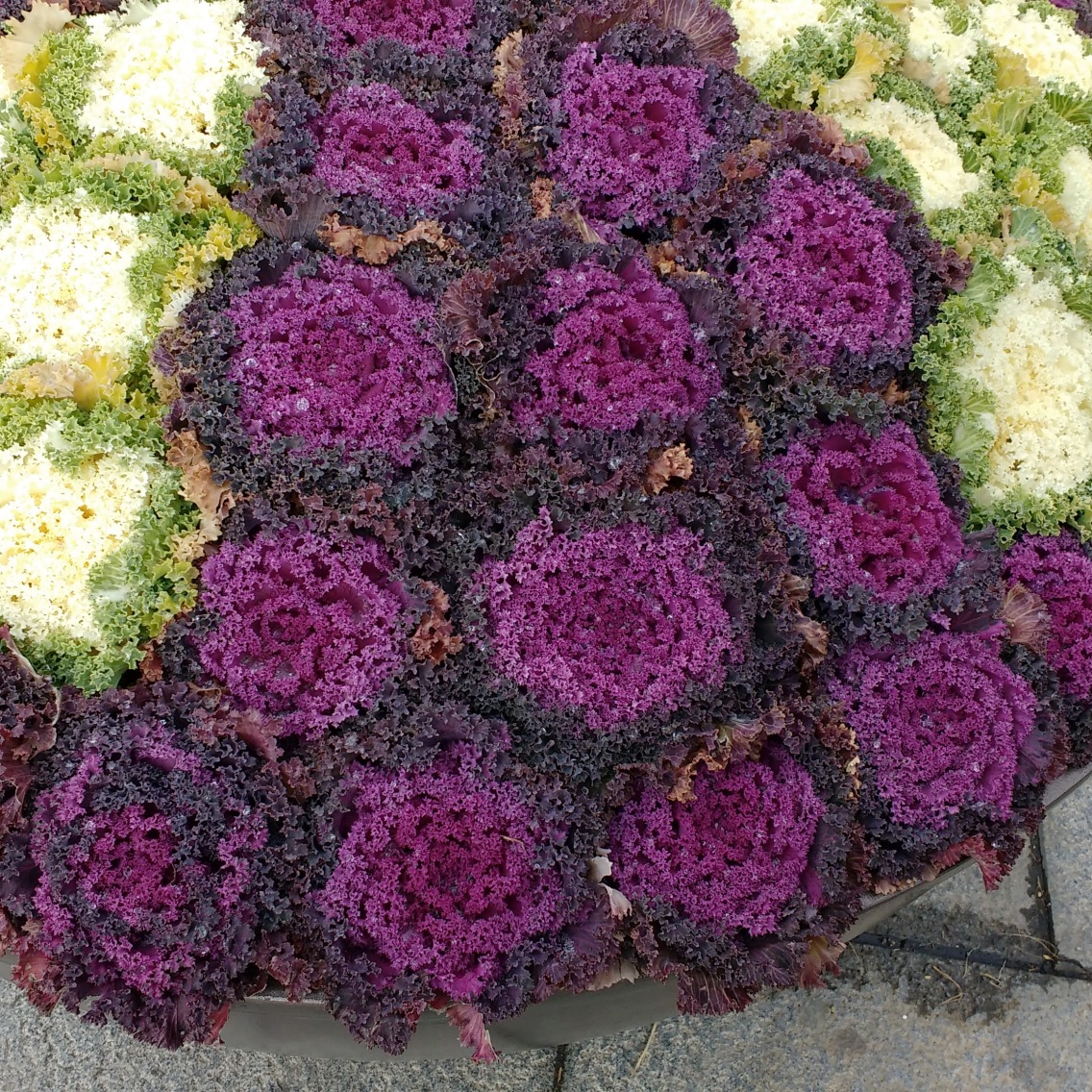 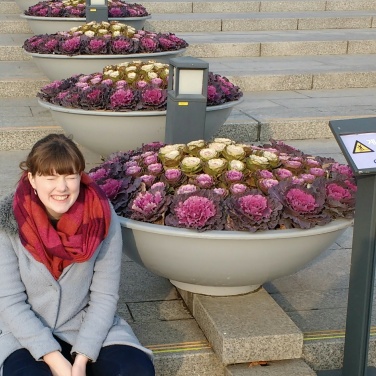 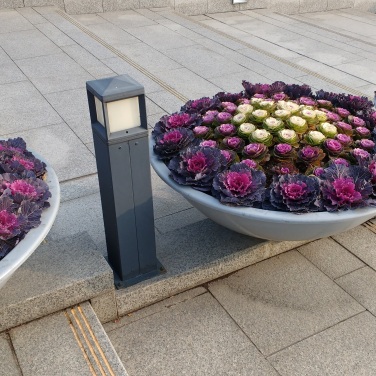 Motorbikes are free-range. Bad photo because they move quickly too.

It’s a standard flavour alongside pork and spicy beef and tuna, and I’m not sure I understand. Chuseok is the autumn festival harvest celebration, for which there is a 3 day national holiday and people give their friends spam gift sets.

4. Your bum gets heated

Sit down on the subway and you will find yourself warmed from below. Yesterday we nearly burned our hands on the seats they were so hot. There’s a lot of underfloor heating, including in my guesthouse room. I have to put socks on pretty quickly in the morning or I get the same sensation as holding my hand to a radiator for a little too long. I really like how warm it is, except everything I own is melting/toasty as my room is so small so most things have to go on the floor. Warm toothpaste is to be avoided. 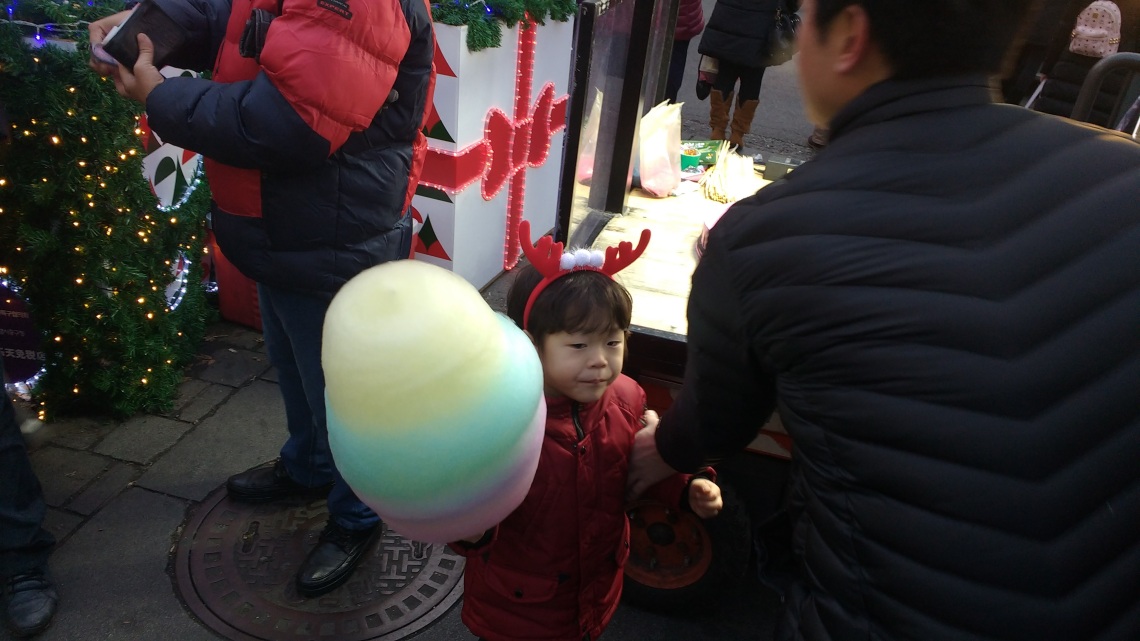 First use of a ‘toilet in the floor’, sometimes you should be putting loo paper in the bin and not the toilet, and every set of toilets has a sink area and then a kinda ‘cosmetic counter’ area where you can do your make-up? The little signs on the doors tell you which kinda style toilet you’re gonna get.

They also like poo a lot – this is a photo of a poo-themed restaurant in Insadong! 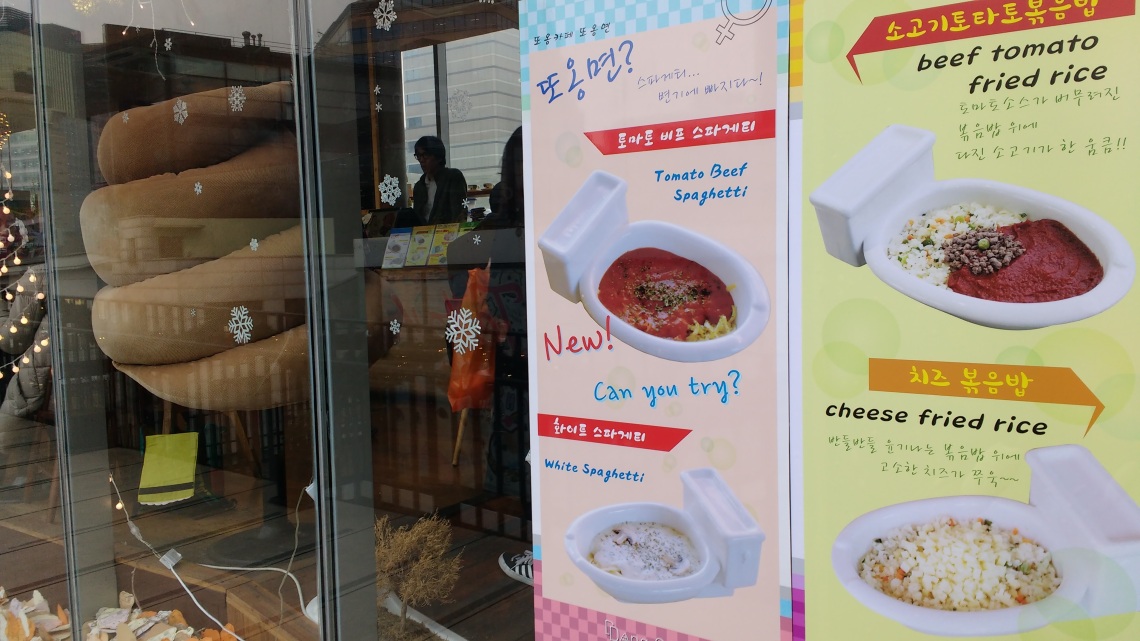 7. A distinct lack of bins

Woe betide you if you have lots of street food wrappers in your hand. Bins are hard to find, and mostly you just find a bin bag on the side of a stall or shop in the street and slip your rubbish in there.

There doesn’t seem to be any rules about broadcasting music on the streets. So street sellers sometimes have speakers or microphones with them, and if you’re in the main shopping areas like Myeongdong, you get a badly put together mash-up of all the different songs being played by the different shops. Including inadvertent English swear words, songs with Korean swear words cannot be played, but English ones can/are! 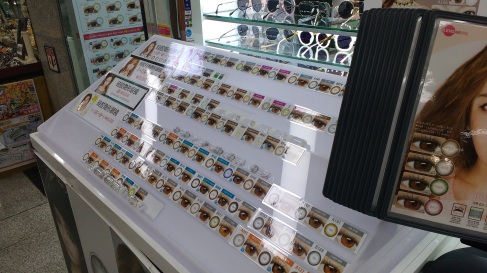 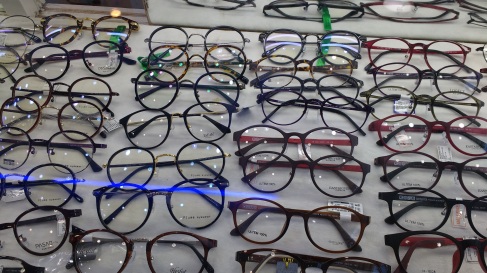 Also, heads up, round glasses are the trend. 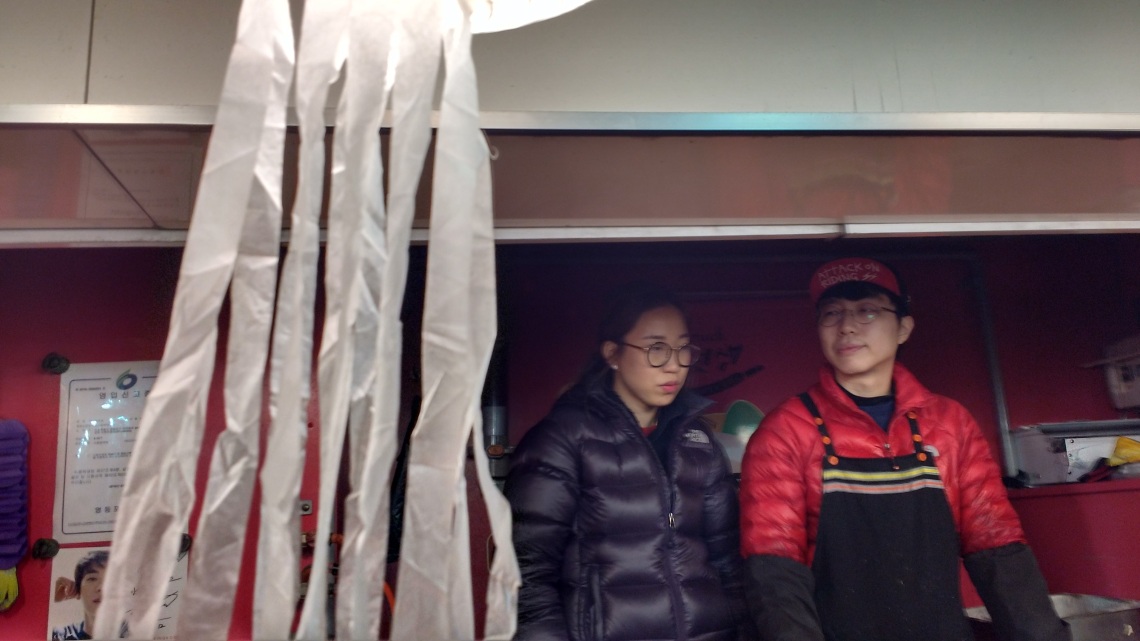 10. Putting groups of shops all together

So when we were on the bus and one of the stops was announced as ‘Weddingtown’ I didn’t think so much of it because you get bridal shops all in a row in the UK. However, then going past ‘Electric shopping mall’ was a whole new thing. Tried to take a photo of one of the LED lighting stores but couldn’t because it was too bright! There were just rows of lighting shops and electronic shops and then CCTV shops. I would pick here if you’re in SK and need a light bulb just fyi.

On the streets and in subway stations. Not sure why it’s a bell in particular?

In the above photo you can see the word ‘Korean Tourist Police’. I think it’s just a tourist information point, but at first I wasn’t so sure!

There are a lot of English translations which you read and you kinda think you know what they’re getting at, but you’d love to know the meaning of the Korean so that you could check! One of the scent shops had a sign outside it saying ‘Don’t come in here if you don’t like scent’? And the following photo from the Insangwan mountain trail is so sweet, but I’m not sure the Korean says the same! 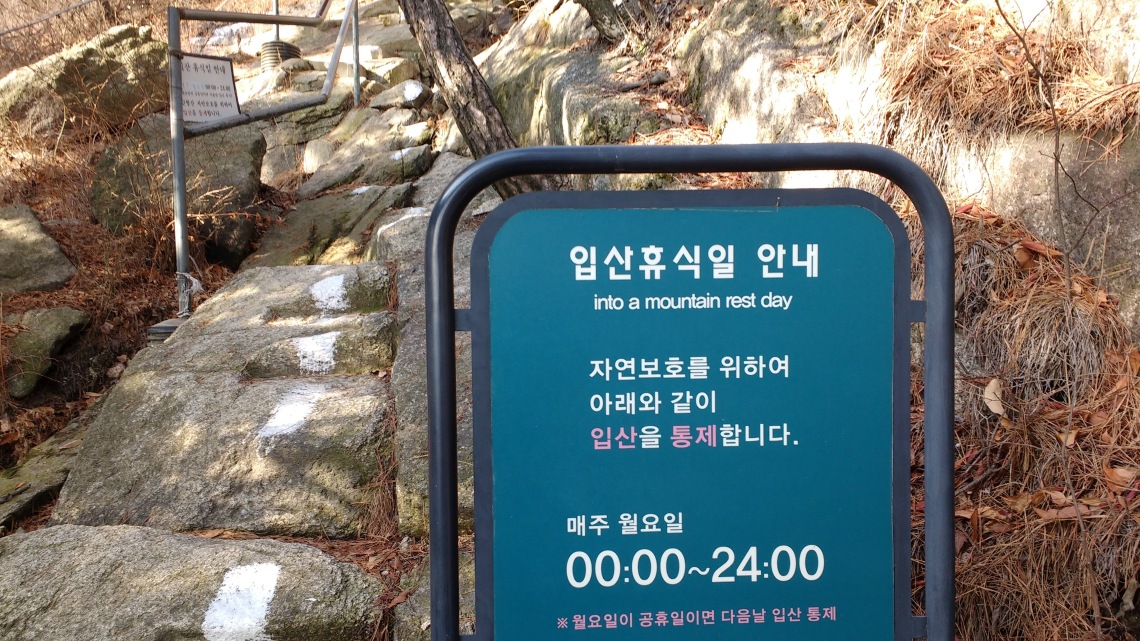 And this t-shirt – does she mean this? 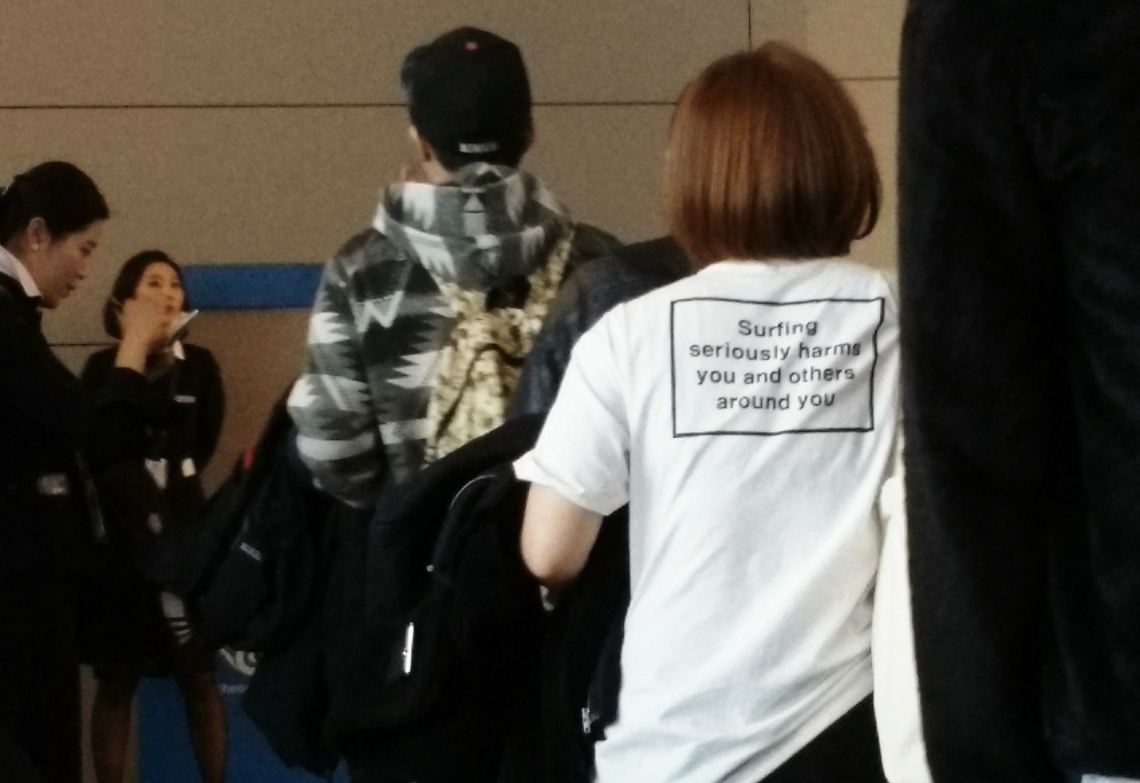 But my favourite is this photo of a restaurant. I thought maybe it was just a restaurant with an attitude, but then Corliss said the words either side say things like ‘welcome’, so maybe a translator had a bit of fun one day…. 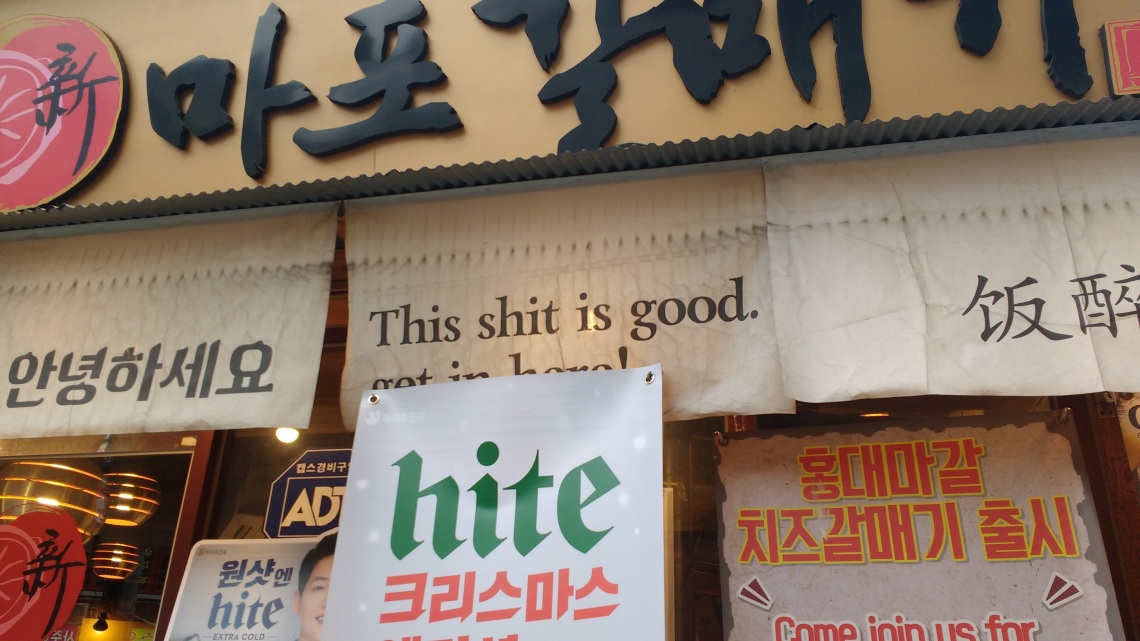 15. Christmas is a thing/not a thing

There are a lot of Christmas decorations. But Christmas Day is like every other day. It’s not a holiday and it’s not spent with family. It’s more of a ‘couples’ day, and whilst a lot of people were having fun this year because it fell on a weekend, it isn’t really a big deal in SK. But will you hear ‘Last Christmas’ and ‘All I want for Christmas is You’ about 5 times a day even after the 25th? Yes. Yes you will!

This guy hangs out on rubbish trucks and official looking notices. Corliss doesn’t know who this lil’ guy is though, and she’s been in SK for 6 months.

Worn mostly for special occasions. They are expensive, so there are lots of rental shops around the city. 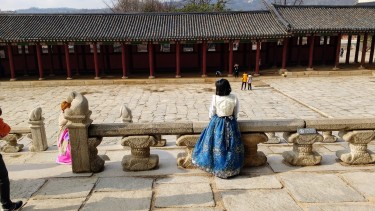 18. Well-prepared in case of disaster

As seen in the subway stations… 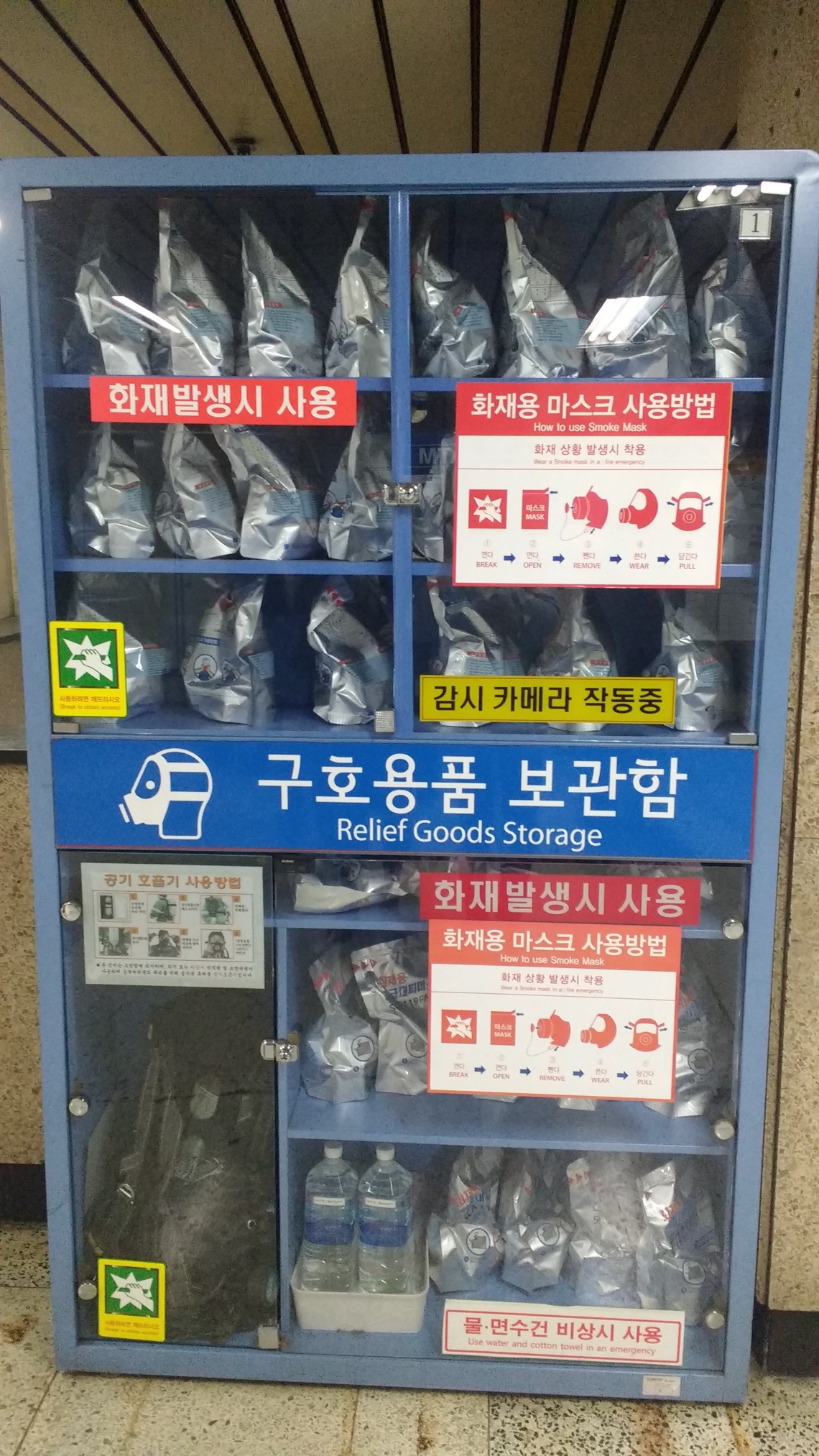 Only small dogs are ever around, and they often have cute costumes on!

They have their own shops! Apparently not quite as ‘scammy’ as in the UK… 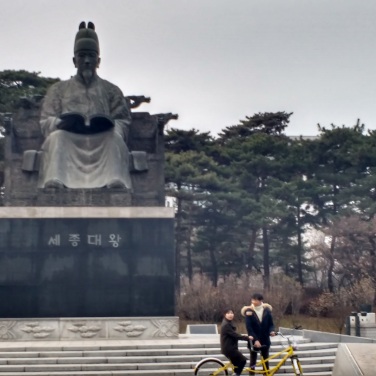 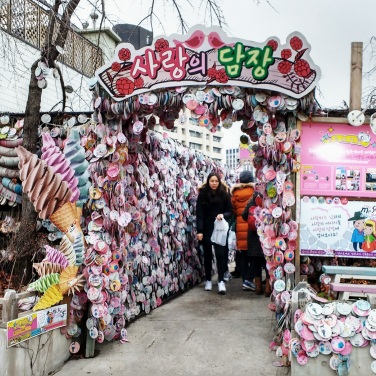 Luckily though, if you don’t have a boyfriend, you can get churros! 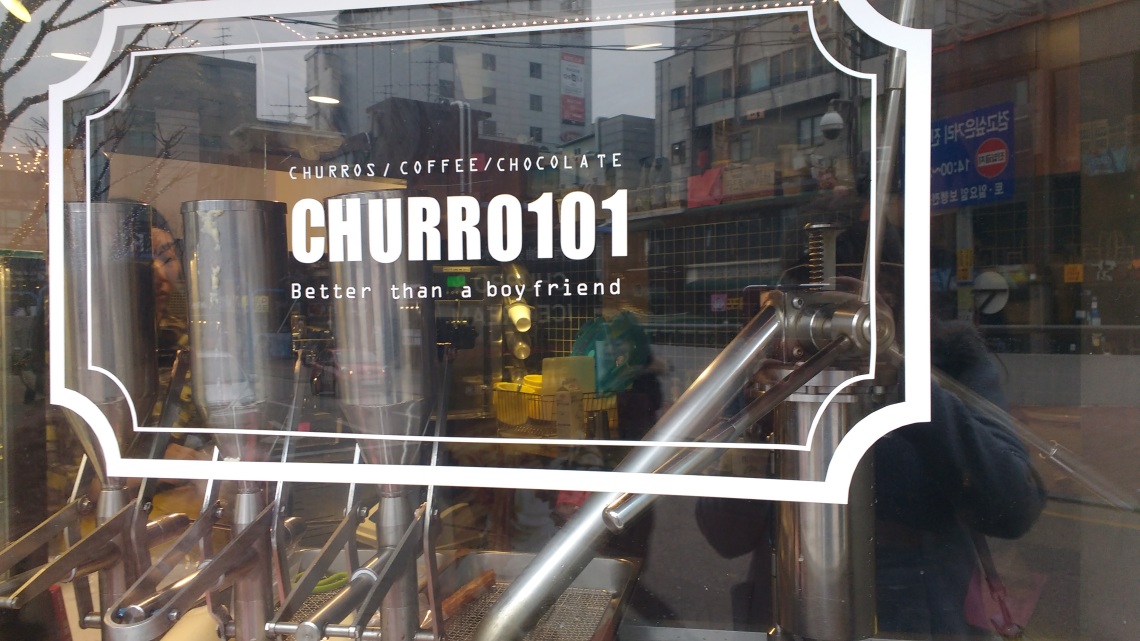